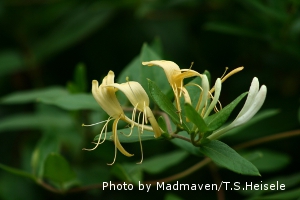 Honeysuckle is a plant that gardeners either love or hate. Some members of the genus Lonicera were originally introduced from Asia, but there are also native American species. Coming in both a vining and shrub form with arching branches, this plant can be found growing wild along the edges of woods and roadsides.

Newer varieties come in many different colors and have more refined growth habits. Blooming from summer to fall, these easy to care for plants attracts bees and hummingbirds and most have berries that birds enjoy.

There are species that are considered invasive. Morrow’s and Amur are bush types while Japanese and Tatarian are vine types. These species can rapidly crowd out native plant species and adapt well to different climates and poor soil conditions. We have a couple of the Morrow’s species growing at the edge of our yard that were here when we moved in. They are among the first plan they haven’t spread appreciably in 30 or so years, they are also at the edge of the lawn, and mowing may keep them in check.

There are many species that have been adapted and hybridized. Several have even received the Royal Horticultural Society’s Award of Garden Merit such as the vine type L. similis ‘Delavay’ and L. purpusii ‘Winter Beauty’ which is a relatively compact bush type.

The climbing types can be used like other vines to soften or conceal a wall, or grow on arbors or trellises. Many of them are heavily (or is it heavenly) scented such as L. periclymenum 'Winchester' and the bush-type species L. fragrantissima which is commonly sold as Winter or Fragrant honeysuckle.

The Trumpet honeysuckle, L. sempervirens  is a species native to the eastern United States, and is rated as one of the top plants for attracting hummingbirds.

When choosing these plants for your garden, pay attention to their habit and eventual size. Like most plants, they like well-drained soil with plenty of organic matter, but they will also thrive in soil that is less than perfect and without much care or fertilization.