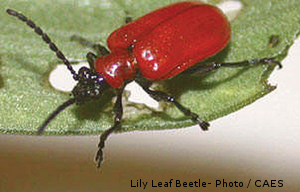 The lily leaf beetle (Lilioceris lilii) is an invasive pest from Europe. It has been found in several northeastern states and recently on the west coast in Washington State. It will lay its eggs and develop only on true lilies, Lilium species (Easter lilies, Asiatic and Oriental lilies) and fritillaria (Fritillaria sp), but not Day lilies (Hemerocallis).

The bright red beetles emerge from the ground in spring and start feeding on the foliage as soon as it starts breaking through the soil. Like any pest, prevention at this stage of the game follows the old adage- “An ounce of prevention is worth a pound of cure.” Keeping an eye out for the bright red insects and disposing of them before they start their cycle of breeding and laying eggs will go a long way towards controlling them later in the season.

The eggs are laid in rows on the underside of the plant leaves and are light brown or tan in color, but they change to an orangish-red color just before hatching which occurs 4-6 days after they are laid. Once the eggs hatch, the real destruction begins. The larva of the insect disguises itself with the rather disgusting habit of depositing it’s feces on it’s back. Thus, what might appear to be droppings is actually a lily leaf beetle larvae having lunch at your expense. The larva spends 16-24 days eating away before they drop to the ground and pupate. They spend an equal time in the soil until they emerge as adults and start the cycle over again.

Controlling the beetles consists of the usual methods of hand-picking the beetles and larvae, and looking for and removing eggs on the underside of leaves.

Some research has been done regarding the use of parasitic wasps as a biological control. The most effective control found to date has been the use of Neem Oil based sprays. Also, products containing Spinosad, an organic insecticide that is safe to use when the plants are not in bloom to protect honeybees have been found to be effective. Products containing imidacloprid, a systemic insecticide have been found to be effective but we strongly advise against using any product that contains this chemical as it has been implicated in the so-called “Colony collapse disorder” that has decimated the honeybee population.

When using pesticides it is important to take precautions to protect pollinating insects such as bees. Apply pesticides in the evening when fewer bees will be foraging and when spray drift due to wind and volatilization due to heat are at a minimum. Do not spray during windy weather to prevent drifting. Avoid spraying when plants or nearby plants (including weeds) are in bloom. See the fact sheet "Protecting Bees from Pesticides" (Purdue University).

Images of the lily leaf beetle can be found at Bugguide.net.